Home » Animations » Castlevania Season 3 Review: The World Can Be A Cruel Place.

Castlevania Season 3 Review: The World Can Be A Cruel Place. 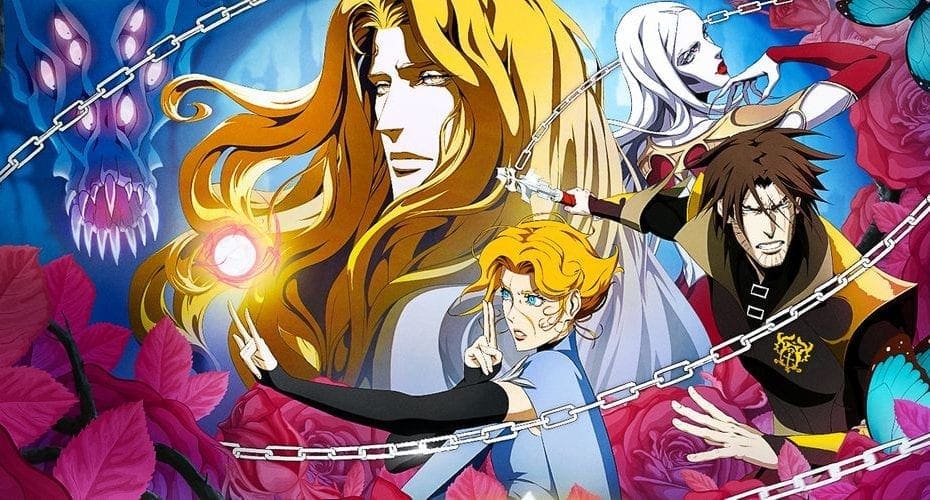 Where To Watch Castlevania Season 3:

With Dracula dead, the Castlevania season 3 kicks off with its characters searching for a new purpose. And this trend splits the new season into four incredible stories, with one common lesson, “We live in a cruel and unforgiving world.”

At the end of last season, Trevor and Sypha left Alucard to find new adventures. And after deposing a band of demons, their quest brings them to the strange town of Lindenfeld.

However, we soon discover that the town’s Monks are at the center of the strange activities in Lindenfeld. And to some skillful investigation from St Germain, we learn that the Monk’s plan to revive Dracula and his wife using a portal called “The Infinite Corridor.”

This all leads to an epic confrontation between The Monks and The Judge’s Men.

And while Sypha and Trevor stylishly eradicate the emeging hell spawn, it’s St Germain that closes “The infinite corridor” and stops Dracula’s revival.

But just before Germain closes the Infinite Corridor, we see Dracula and his wife reach for the portal. Implying that they can not only leave Hell but that someone else might try again in later seasons.

After closing the portal and defeating the Monks, Trevor and Sypha find The Judge bleeding to death. And as he lay dying, The Judge begs Sypha to burn down his house with everything inside. But when Trevor inspects the house, he discovers that the Judge had been murdering the children Lindenfeld.

With their faith in Humanity lost, Trevor and Sypha leave Lindenfeld enraged, promising to never return.

With both of his parents dead, and his only friends gone, Alucard falls into a deep depression similar to his father.

However, Alucard soon meets two vampire hunters, Zumi and Takka, who plead with him to teach them how to fight vampires. And at that moment, Alucard believed that he had found his new purpose. To pass on of all Dracula’s and the Belmont family’s knowledge, to another generation.

Throughout the rest of the season, Alucard trains Takka and Zumi in the proper hand to hand combat and tactics. However, things take a turn for the worst when the vampire hunters trick and capture Alucard, believing him to be just as cruel as every other vampire.

But just before they can end him, Alucard kills them both and uses their Corpses to discourage anyone from approaching his castle.

And so, Alucard ends up on the same path as his father, Dracula. Depressed and sick of humanity.

Out of the four-story arcs this season, Isaac’s story was by far the most interesting.

Ever since his introduction in season two, I have really enjoyed his character. He is a principled man who possesses both the power and skill to achieve his goals. And while he can be ruthless, he is not without mercy.

Harboring a deep hatred for humanity, Isaac wanted only two things at the beginning of Castlevania Season 3, to get revenge on those who betrayed Dracula and end humanity. And considering how most people treat Isaac in this season, I can’t blame him.

But while on his quest for revenge, Isaac meets a ship captain who explains that ending humanity will stop human cruelty, it also means ending human kindness. And this realization creates doubt within Isaac, who had, until this point, destroyed every city that refused to let him and his minions pass.

However, while trying to decide whether humanity is worth sparing, Isaac finds a town made up entirely of mind-controlled slaves. And after killing the wizard behind the enchantment, Isaac prepares for war against those who betrayed Dracula.

Carmilla, The Council of Sisters And Hector.

After their failed attempt to overthrow Dracula, Carmilla takes Hector prisoner and brings him to her castle in Styria. There, we meet Carmila’s sisters, Lenore, Morana, and Striga. And together, they form The Council of Sisters and ruler over Styria.

With Dracula gone, Carmilla plans to expand her territory and then place a massive border around it. This way, the human families within this region will serve as an endless supply of blood for her and her sisters.

However, the plan comes with a major flaw.

In other to expand her territory Carmilla will need an army, but to get the army she wants, Carmilla needs Hector to forge her night creatures who will bolster her forces.

Worst of all, whenever Hector forges a night creature, they are loyal to him and will only follow his orders. And after beating him to a pulp and throwing him into a dungeon, Hector understandably has no intention of helping Carmilla with her plans.

The red-haired vampire takes a liking to Hector and tries to make his stay in Styria more pleasant.

Over the course of season three, she changes Hector’s cell and then brings him books and proper meals. And in time, she and Hector develop feelings for each other.

However, while making love, Lenore uses the opportunity to bind hector to her will, essentially turning him into her pet. This way, Hector can never betray or disobey Lenore. And whenever he forges a night creature, the creature automatically becomes loyal to Lenore and her sisters.

While Castlevania season 3 is not as good its first two seasons, it succeeds at setting up the world for the fourth season.

However, what’s ironic about season 3, is how every character starts the season hoping for a better outcome than last season. But by the season finale, most of them end up in a worse situation than before.