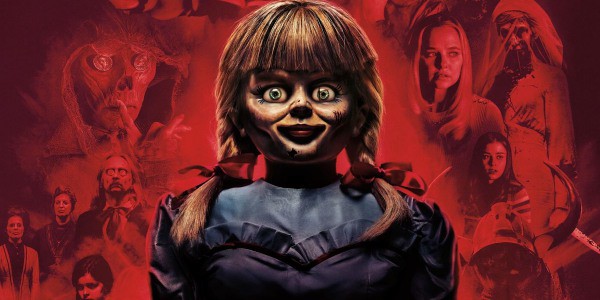 Annabelle Comes Home is the seventh Movie in the Conjuring Universe and takes place after the events first Conjuring Movie.

Determined to keep Annabelle from wreaking more havoc, paranormal investigators Ed and Lorraine Warren lock the possessed doll in the artifacts room in their house.

But when the doll awakens the room’s evil spirits, it soon becomes an unholy night of terror for the couple’s 10-year-old daughter, her friends, and their young baby sitter.

Ever since Conjuring 2, I’ve always wondered what the life of The Warren’s daughter, Judy must have been like.
And not just because she has demon-battling parents, but because of her inherited ability to see spirits who can see her too. (Which is a messed up ability for a Ten-year-old to grow up with)

Luckily all these questions were answered in The Conjuring Universes’s Latest Entry, Annabelle Comes Home.

How Annabelle Comes Home Fits into The Conjuring Universe Timeline

The Movie wastes no time, in showing us that life was lonely for young Judy.
However, this was mostly because of her parent’s infamy as demonologists.

But Judy’s childhood isn’t all lonely, as she finds friends in her babysitter, Mary Ellen. And her friend Daniela (who I’ll expand more on upon ).

And with all relevant Human casts members introduced, we then meet the main attraction, Annabelle.

Honestly, after seeing the Movie, a proper title for this film would be Annabelle comes for revenge.
Because from the second the demon gets out, it sets its sights on Judy and does everything in its power to get her soul. And even gives the poor girl a haunting private show.

However, Annabelle is not the only demon to surface in this hour and twenty-minute long film.

The Bride and The Ferry Man From Annabelle Comes Home (Credit: Warner Bros)

Throughout the Movie, we’re introduced to several more entities, with the main additions to The Conjuring Universe’s ever-growing demon list being The Bride, The Samurai, and The Ferry Man.

The Conjuring Universe’s ever-growing demon list adds The Bride, The Samurai, and The Ferry Man tell a friend

These demons and alongside their leader Annabelle, wreak havoc in Warren’s House and deliver impressive scares. Which nearly bring the three young women to a breaking point.
But thanks to Judy’s experience with the curse objects and God’s Grace, the trio are able to return the demonic doll to her case in an intense final confrontation.

RELATED:The Infographics Shows’ You vs Annabelle

However, there’s no character guiltier of this crime than Daniela, who’s entire story seemed to exist just to progress the Movie’s plot.
And while I appreciate the character’s motivations. I can’t help thinking that was a better way to communicate this to the audience.

But where it became infuriating, was where one demon began showing Daniela how the others would deal with her. And she still fell for the trap.
Or she would have had Judy not come in to save her life.

Despite its flaws, Annabelle Comes Home is a solid entry to The Conjuring Universe. And I had a great time watching it.
But of the three Annabelle movies released so far, Annabelle Creation is still the best.

4 thoughts on “Annabelle Comes Home should be Annabelle’s Revenge”