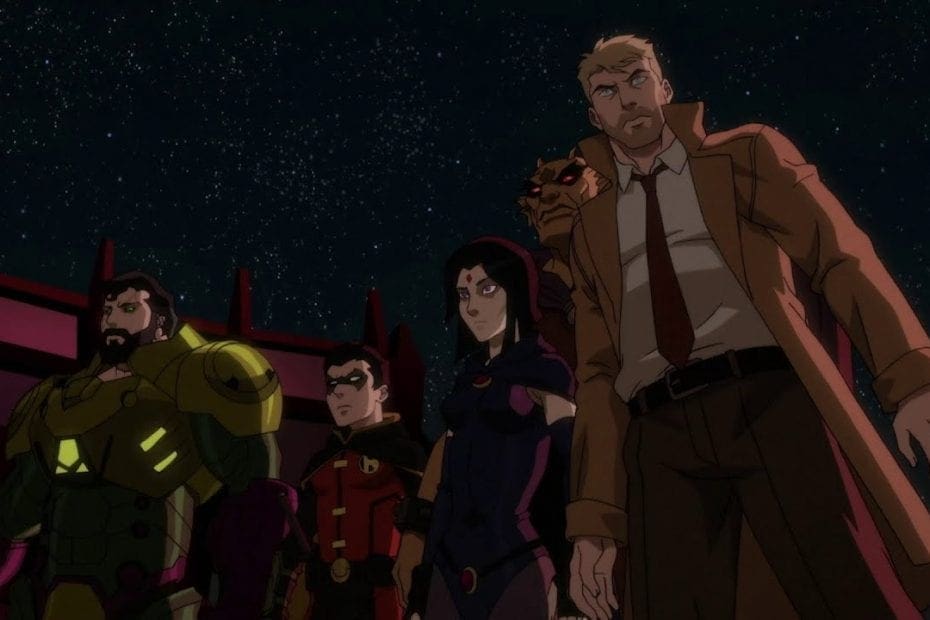 Home » Animations » Justice League Dark: Apokolips War Has A Lot To Love And A Bit To Hate

Justice League Dark: Apokolips War Has A Lot To Love And A Bit To Hate

After seeing Justice League Dark: Apokolips War twice, I’m still not sure how I feel about the animated movie.

On the one hand, Apokolips War had some powerful moments that I really enjoyed. But then on the other, they’re parts of the animated movie that I wish were different.
And so, to make my opinion clear, I will split this review into two sections, What I loved (The Good) and What I Hated (The Bad).

“Accept the things you cannot change. Have the courage to change what you can. And have the wisdom to know the difference.“

The opening quote of Justice League Dark: Apokolips War was sheer perfection. It was an excellent reference to the Flashpoint Paradox, and it foreshadowed the end of the New 52 DC Animated Universe.

However, this isn’t the only Easter egg linking Apokolips War to past DCAU Movies.

My favorite reference is when Harley Quinn confirms that Amanda Waller is dead. This Easter egg is a callback to Suicide Squad: Hell Pay, which saw Waller diagnosed with a terminal illness. But rather than accept her fate, Waller sends the Squad to find an artifact that would help her escape judgment and send her straight to heaven.

At the start of Apokolips War, we find our Heroes making plans to assault to Apokolips and kill its master, Darkseid. But unbeknownst to the Justice League and the Titans, they had lost the war before it even started.

When it comes to death, Apokolips War pulls no punches. And after their botched assault, Darkseid annihilates more than half of the DCAU Superheroes.

However, rather than destroy them all, Darkseid transforms vital members of the League into his new minions. While reserving the worst punishment for Superman by injecting him with liquid Kryptonite, rendering him powerless.

But even if Darkseid didn’t spy on them, no one thought the Justice League would win against him. Back in Justice League War, the best the League could do was push Darkseid back to Apokolips. And that was before he had his army of Paradooms.

With The League gone, The Lord of Apokolips was free to conquer the earth and then the Universe.

However, Darkseid’s biggest power flex comes when he assaults the Green Lantern’s home planet, Oa. He thoroughly destroys The Green Lantern Corps, and leaves Oa, burning in his wake.A warning to any that would dare defy his will.

However, all hope is not lost.

The stand out star of Apokolips war is undoubtedly John Constantine. While this is only his second appearance in The New 52 DCAU, Constantine plays an essential role in defeating Darkseid.

Seeing him wield magic in all its glory was just amazing. And I loved that Apokolips War used his relationship with Zatanna to deliver an epic twist.

And this is the real gem of Justice League Dark: Apokolips War. The animated movie takes its time to conclude many storylines in the DCAU. The most obvious one being Raven’s Relationship with Damian and her father, Trigon.

I loved the dynamic between these three characters. And as expected the Apoklips War makes good use of the Demon Lord Trigon.

However, I would have loved it if Trigon had possessed Damian instead, to fulfill his warnings to Raven. But given the situation, I guess Superman was the better option.

I think the most annoying aspect of Justice League Dark: Apokolips War has to be how it downplays certain characters.

While Apokolips War has the largest roaster of superheroes in DCAU history, the movie also had no time to focus on half these characters. And this problem led to many characters having nothing to do, other than dying for shock value.

An excellent example of this atrocity is Lady Shiva.

This goddess is the third best fighter in all of DC Comics. And the best Apokolips War could do, was to have her die like an irrelevant background character (Come on).

And then there is Damian’s death.

Damian sacrifices himself to save his father, in a brilliant scene that showed how much he’s matured since Son of Batman. However, Apokolips War cheapens this moment by bringing Damian back to life, in the most Disneyest way possible.

But the worst crime Apokolips War commits is leaving Lex Luthor alive. No matter how much I think about it, there is no reason Luthor should be alive. And at the very least, He should have been brainwashed, like the rest of the League.

Lex Luthor is infamous for switching sides whenever it’s convenient. And for the fact that Darkseid decided not to put Luthor under his permanent control at least, is terrible writing.

Looking at the bigger picture, I love that Justice League Dark: Apokolips War brings the New 52 DCAU full circle. This Universe kicked off with Flashpoint in 2013, and now seven years later, it’s ending with another Flashpoint.

However, as a standalone movie, Apokolips War bites off more than it can chew by taking on one too many storylines. And because of this lack of focus, the animated film ends up sacrificing aspects of certain characters to deliver on most of its promises.

But what do you think about Justice League Dark: Apokolips War? Did you love it? Did you hate it? Let us know in the comments below.