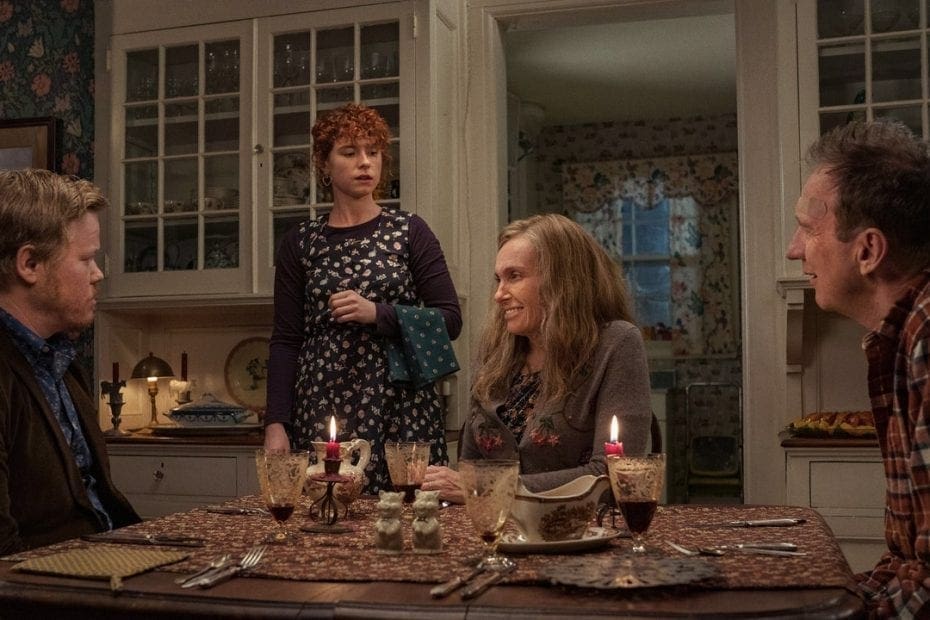 Where To Watch I’m Thinking of Ending Things:

I’m Thinking of Ending Things is one of those movies you’re going to either love or immediately hate. The film uses several metaphors to represent important concepts. And if you’re not a fan of nonlinear storytelling, I doubt you’ll enjoy this movie.

However, if you’re like me, and you enjoy weird metaphorical films, then sit back, relax and enjoy the ride.

What Is I’m Thinking of Ending Things Really About? (Spoilers Ahead)

On the surface, the movie seems to follow a young woman named Lucy, who travels with her boyfriend, Jake, to visit his parents. But during the trip, Lucy has second thoughts about their relationship and thinks about ending things with Jake.

However, beneath this simple story, is a complex tale of Love, Regret, and Death.

The movie’s real protagonist is an older version of Jake, whom we see as a High school Janitor at various points in the film. It turns out Jake lived a lonely and unfulfilling life, and he’s now haunted by the regret of the many opportunities he missed while he was younger.

Most of the movie takes place in Older Jake’s head. And the road trip his younger self takes with Lucy is actually Jake reflecting on his life.

As the movie progresses, the film drops several clues that lucy isn’t a real person, but an imaginary character in Jake’s Head. However, despite not being real, Lucy is the most important character in the entire film as she represents three major aspects of Jake’s life- Love, Success, and Death.

As love, Lucy represents every woman Jake has loved over the years. The most obvious hint at this is how Lucy’s name changes throughout the movie. From Lucy to Lucia to Louisa and Amy, it’s clear that Lucy’s character is Jake’s idea of a perfect woman.

What’s interesting about this aspect of the movie is that each time Lucy’s name changes, the couple tells a different story of how they met. And while each story ends on a happy note, we, as the audience, can tell through Older Jake’s life that none of his relationships ended well.

At the start of the movie, Lucy recites a poem to Jake titled “Old Bones.” And one of the first lines in the verse says, “returning home to a wife or wife-shaped loneliness is terrible.”

This poem gives a perfect description of Jake’s life. And through it, we learn that Jake lived a lonely life, where he returned home every day to meet no one.

This lack of love and a life partner most likely contributed to Jake’s depression. And it’s one of many reasons the character tries to imagine a different life where things went better.

When it comes to success, Lucy represents everything Jake failed to achieve in life. She is a bolder version of Jake, who, unlike him, accomplished her dreams and Ambitions.

Throughout the movie, you’ll notice that Lucy’s job changes with her name. And we find out that she became a Physicist, Poet, Painter, and even a fantastic movie critic.

These professions were part of Jake’s dreams at some point or another. But due to his low confidence and his mother’s failing health, Jake had to abandon them.

Lucy represents the love and success that Jake never experienced, and this is the reason Jake refers to her as his Ideal woman.

The final part Lucy represents in Jake’s life is death, and this the most important aspect.

Throughout the film, we see Lucy repeatedly ask herself whether she should end things with Jake. However, as the movie progresses, we soon realize that the real person asking this question is Older Jake.

Filled with regret of how things played out in his life, Older Jake concludes that the only way out of his suffering is to end his life. But since he can no longer trust his judgment, he leaves the decision to his subconscious, who turns out to be Lucy.

At various points of the movie, Older Jake calls Lucy as herself, asking her to answer his final question. “Should I end My Life?” And after getting his answer, Jake proceeds to the car in the dead of winter, strips naked, and dies from Hypothermia.

They say just before you die, your entire life flashes before your eyes. But for Jake, the 2-hour runtime of I’m Thinking of Ending Things was the flash before the end.

Second, only to Relic, I’m Thinking of Ending Things is my favorite physiological drama of the year.

While the film has a dark story, It’s incredible how many ways one can interpret this fantastic movie once you understand it. And I love how the entire film plays out like a giant jigsaw puzzle left for the audience to solve.

However, because of it’s nonlinear story, I feel many people will end up skipping this film, which is unfortunate.

Check out our September Movie and TV Guide for recommendations on Movies, TV Shows, and Animations to try out this month.