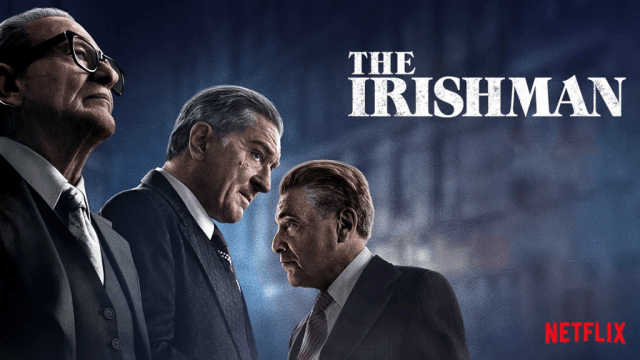 Home » Movies » The Irishman Review: Why and How You Should See It

The Irishman Review: Why and How You Should See It

The Irishman is one of those films that will go down as a timeless tale about the Italian Mafia.

This biographical thriller sees Frank Sheeran (Robert De Niro) reflecting on his time working for the Bufalino crime family. Now, older, the WWII veteran, recalls his most prolific hits and his involvement in Jimmy Hoffa’s disappearance.

“I heard you paint houses.”

I’ve always enjoyed movies like The Irishman. Films like these seem tedious at first because they focus more on discussion rather than physical action.
But they always lead to scenes so quick and tense, that the audience requires little to no explanation to grasp what has just occurred.

They move from inception to planning and then execution.

And that’s what the Irishman is. A three-hour movie about the Italian Mafia, making moves to keep themselves (and their friends) in power. While removing their adversaries from the board.

The movie shows betrayals and sacrifices necessary to survive in this crime world. And holds no punches in linking certain popular men in US society to the mob.

As expected from a Martin Scorsese movie, the acting in The Irishman is impeccable. With Oscar-worthy performances coming from Joe Pesci, who plays the quiet yet powerful Russell Bufalino. And Al Pacino, who plays sharp-tongued Jimmy Hoffa.

But it was Robert De Niro that kept me invested in the Irishman. His portrayal as Frank Sheeran was somber, calm, and dutiful. However, what surprised me, was the unexpected humor he injected into scenes that were dark and very disturbing.

I mean, imagine giving tips on how to kill mobsters, minutes before you kill a member of the Italian Mafia.
From what type of gun to use and how to use it in the scenario. Not to mention the general spot everyone uses to dispose of the weapons after a successful hit.

you can’t make this stuff up.

However, all this speaks to the quality of movies we expect from Martin Scorsese.

But as much as I enjoyed this Irishman, I have to say it’s very long. And if you’re discouraged by movie three-hour runtime, you can try out this helpful tip from Alexander Dunerfors Kardelo.

At its core, The Irishman is really about a man reflecting on his past life. While trying to make amends where he can, before leaving to see his maker.

2 thoughts on “The Irishman Review: Why and How You Should See It”