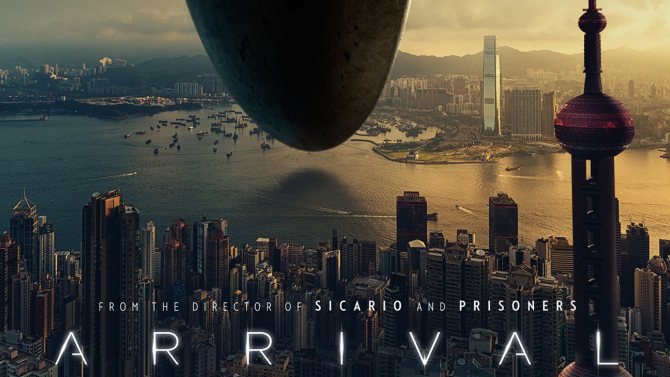 – “If you could see your life from start to finish would you change anything?”

When twelve gigantic spaceships land around the world, the U.S. military recruits a linguistics Professor named Louise Banks to help communicate with the extra-terrestrial visitors. But while trying to unravel this mystery, Louise takes a chance that could threaten her life and possibly end humanity.

From the start, arrival distinguishes itself by taking viewers on an emotional journey. Throughout the film, we get to see the trials of parenthood through the relationship between Louise and her daughter.
But, the relevance of this relationship doesn’t show itself until the movie’s end (or should I say beginning).

Humanity’s reaction to the arrival of twelve space aliens with unknown motivations is predictable. From chants of “the end is neigh” to daily riots on the streets and religious driven acts of violence. By the time Louise steps in, most world leaders are on the verge of considering the Nuclear choice. Louise’s method of deciphering our foreign visitor’s language is impressive. She delves into the root of language itself and manipulates all forms of communication to understand their purpose for coming.

The twist, however, comes when she discovers the gift they intend to share with humanity. And this flips the entire story on its head so much that viewers will have a different view of the movie by its end.

My only problem with this movie is with Ian Donnelly (played by Jeremy Renner). He does so little in this film it seems his sole purpose was to remind the audience how intelligent Louise is.

Arrival’s real message is how in times of trouble we must band together in other to survive. But at its end (or should I say beginning) it leaves a question I still can’t answer.