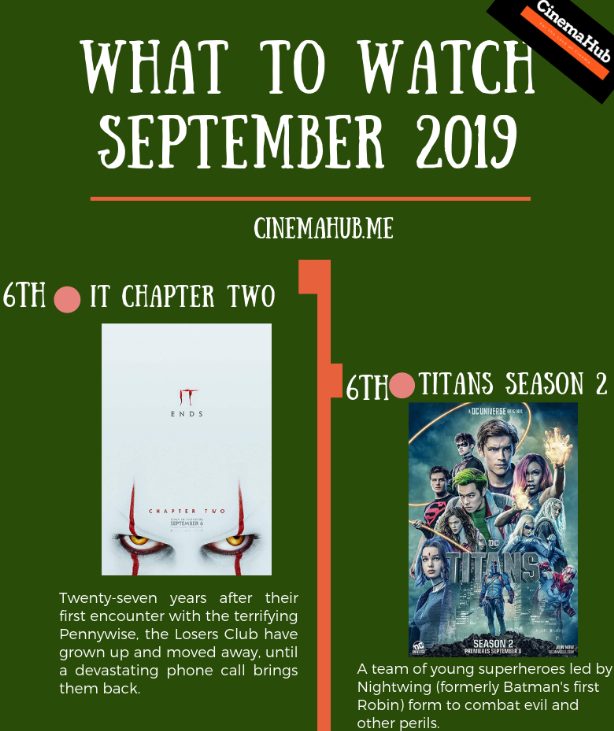 What Movies to Watch In September 2019

September  is here!!! And with it comes the much-anticipated sequel to Stephen King’s IT, as well as the second season of Titans and much more.
Here are the September 2019 Movies and Series to watch our for.

Twenty-seven years after their first encounter with the terrifying Penny wise, the Losers Club have grown up and moved away, until a devastating phone call brings them back.

DOWNLOAD THE FULL WHAT MOVIES TO WATCH IN SEPTEMBER 2019 INFOGRAPHIC

The Titans return with an action-packed second season, as well as fan favorites. From the  bounty hunter Deathstroke, to his daughter Rose Wilson. And the long awaited appearance of the Dark Knight himself. Titans season 2 promises to be ambitious.

A boy in New York is taken in by a wealthy Upper East Side family after his mother is killed in a bombing at the Metropolitan Museum of Art.

Inspired by the viral New York Magazine article Hustlers follows a crew of savvy former strip club employees who band together to turn the tables on their Wall Street clients. Hustlers stars Jennifer Lopez, Constance Wu, Cardi B and more

Astronaut Roy McBride undertakes a mission across an unforgiving solar system to uncover the truth about his missing father and his doomed expedition that now, 30 years later, threatens the universe.

Rambo must confront his past and unearth his ruthless combat skills to exact revenge in a final mission.